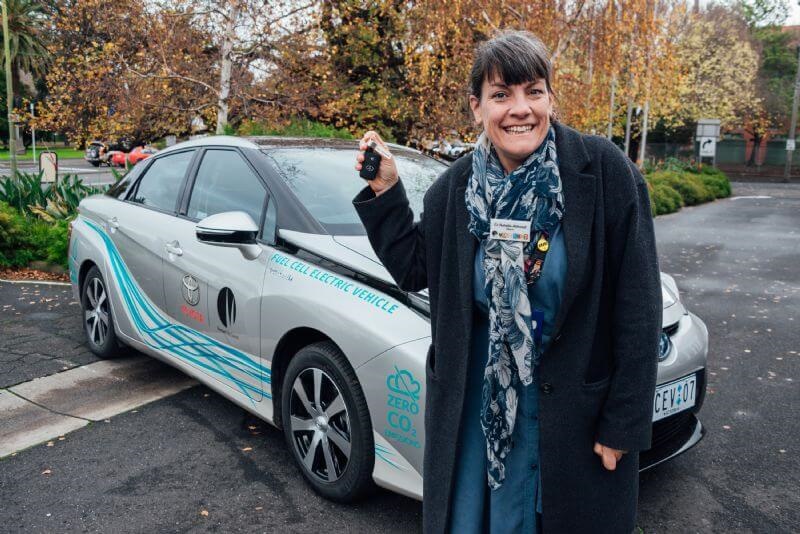 Moreland City Council is the latest organisation to partner with Toyota to trial the Mirai FCEV on local roads.

The Mirai FCEVs loaned to Moreland City Council will be driven on-road in a range of conditions as part of research into the efficiency, usage and benefits of hydrogen technology.

During the loan period of two months, the Mirai FCEVs will be refuelled using a mobile hydrogen refueller at Toyota Australia's former manufacturing site in Altona in Melbourne's West.

"Besides making very little noise and emitting nothing but water vapour from the tailpipe the only real difference with the Mirai FCEV is that it uses a different fuel source, hydrogen, for which there is very little infrastructure available here in Australia," Mr MacLeod said.

"At the moment we are focusing on running trials at locations that are nearest to our hydrogen refueling station but there is a lot of interest in the Mirai all over Australia. Development of infrastructure is obviously a challenge that must be overcome to enable car makers to introduce this technology, especially ahead of impending CO2 regulations.

"Moreland City Council are strong advocates of zero emissions solutions and we look forward to seeing how they use the in-demand Mirai," Mr MacLeod said.

Cr Natalie Abboud, said "Moreland City Council is proud of its record of developing and delivering innovative environmental initiatives that lead the way for the local government sector in Victoria and Australia."

"This exciting trial, in partnership with Toyota Australia, is a continuation of Moreland's environmental sustainability journey and demonstrates our ongoing commitment to stimulate development of zero-emissions transport options powered by renewable energy sources."

"Our first Mirai FCEV was loaned to Hobson's Bay City Council in an Australian first in November last year. Since then, we have had multiple Mirai across many trials being driven by members of the public in real world conditions," Mr MacLeod said.

"All of our trials have gone very well and we're happy to report we have extended many of our trials beyond their initial periods."

Toyota Australia's parent company in Japan has been a leader in designing and manufacturing vehicles while keeping the environment in mind. This is evident through the introduction of the iconic Prius 20 years ago as well as launching the world's first mass-produced fuel-cell sedan, the Mirai, in 2014.

Toyota recently announced a significant acceleration in the development and launch of electrified vehicles including hydrogen fuel-cell, hybrids and battery electric models.

Toyota said it is aiming for electrified vehicles to account for more than 50 per cent of its new-vehicle sales around the end of the next decade. Even sooner, by around 2025, every model would be available as either a dedicated electrified model or have an electrified option.

Toyota Australia will continue to work with governments, industry and other key stakeholders to fast-track the development of the refuelling infrastructure required to support the widespread sale of fuel-cell vehicles.